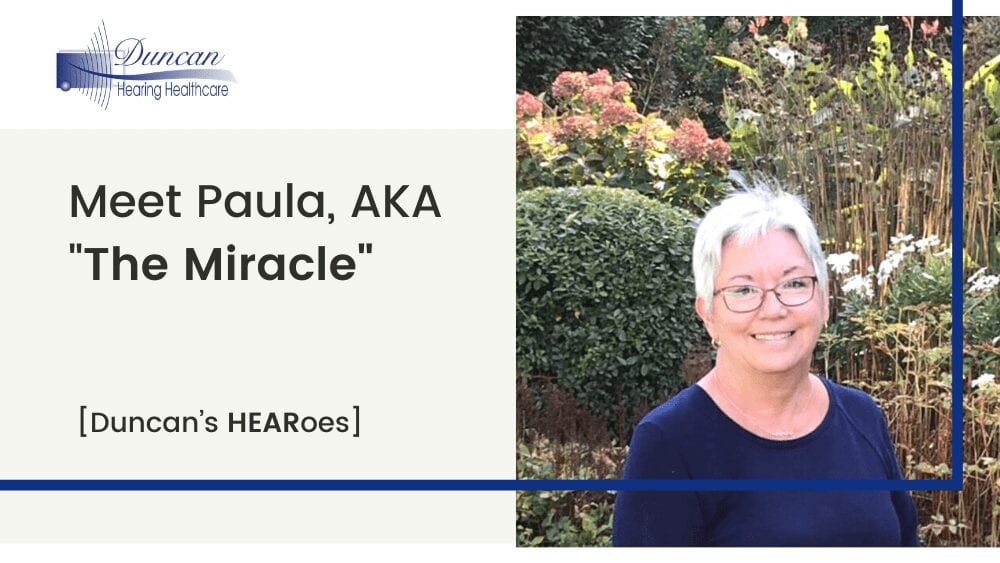 Not long ago, I met someone who changed my whole outlook on life and left a lasting impact on me.

Usually, as an audiologist, I’m used to it being the other way around. But after reading her story, I’m sure you’ll all feel the same.

Paula, also known as “The Miracle,” has battled stage four cancer twice, all while keeping her head held high and continuing to keep a smile on her face.

She loves to travel, especially to Europe, and finds it difficult to choose between Ireland, Portugal and Italy as her favorite.

Speaking with the locals about their culture and history and participating in their community events is the way she prefers to learn. Winters are usually spent on the beaches of Florida.

As I sat down for an interview with her, her bubbly self shone through, and it was hard to believe that she’d fought her way through 4 different types of cancers.

But that’s just the beginning of her story.

Throughout most of her working career, she worked for a community health center and was solely responsible for the public relations, marketing, and fundraising.

Unfortunately, as the years went by, one of the possible long-term implications of her chemotherapy left her with very poor hearing.

As Paula began to notice the deterioration in her hearing, she found that she was missing her grandchildren speaking.

She notes, “Children often say the cutest things, or the most precious things, and I don’t want to miss anything. I have quite an inquisitive nature, so I always want to be a part of the conversation.”

It also became a common occurrence for her to ask others to repeat themselves, especially at work, where she needed to be able to hear everything that’s being said.

“I didn’t realize how many times I was saying, ‘I’m sorry, what did you say?’

“It was my co-workers who noticed that I wasn’t hearing well and brought it to my attention,” Paula adds.

After this realization, she made the decision to go for a hearing test. However, this revealed another surprise.

“So, I went for a hearing test, and the otolaryngologist that I saw asked about my history and the drugs I was taking.

“She said one of them was bleomycin, which can cause hearing loss 20 to 30 years later. And it was perfect timing. The drug didn’t actually cause the hearing loss, but it was something that exacerbated it,” she explains.

It was by chance that Paula happened to know Nancy through her involvement in the Rotary Club, and she was aware of how good she was at her job.

“I knew Nancy as a fellow Rotarian, and I knew what a dedicated provider she was and how she was always so concerned about her patients.

“I needed two hearing aids, and I’m happy to say that it’s made a big difference in my life. I can’t imagine how I would be functioning without them,” she says.

At first, it can be intimidating visiting a clinic, but Paula received a warm welcome and was amazed by the service Nancy provided.

“She carefully, very carefully, selects staff members who are of the same mindset and the same personality. It’s a fun place to be.” Paula adds, “Everyone’s so personable and so accurate and so knowledgeable that’s it a pleasure to visit.”

While Paula’s life has been greatly improved by hearing aids, the next step is convincing her sister, who has bad hearing, to take the first step.

Paula reflects, “I don’t know if it’s fear. I have to talk very loudly with her and she’s missing so much! For a lot of people, it’s the feeling that it’s age-related and they’re afraid to speak up.”

Looking back on her journey with hearing, Paula has been amazed at the difference a small tool of technology can make. Not only has it allowed her to converse with friends and family easily, but she can also now enjoy all the wonderful sounds of nature.

“During a visit to Florida, I went outside on the patio one morning and found it to be strangely quiet. I suddenly realized I hadn’t put my hearing aids in. When I did, the chorus of birds singing and chirping, and the rustling of the palm trees was music to my ears!”

“There’s so many people that are missing out.”

I’m hoping that sharing my story encourages anyone who might be experiencing difficulty hearing to make an appointment with Duncan Hearing Healthcare today.

Their remarkable staff and incredible technology will allow you to realize just what you’re been missing.